Posted on February 3, 2012 by aussieinva

Each year on January 26th millions of Australians around the world celebrate Australia day.The easiest translation is that it is the Australian equivalent to America’s 4th of July holiday.  Its a day to enjoy the outdoors, that’s if its not too blistering hot or the mozzies (Mosquitoes) aren’t biting too bad), go to a concert, have a BBQ, watch the fireworks or just enjoy the day off. It is also a time that many people like to show their patriotism, similar to Americans do on Independence Day. But what is the significance of January 26th? Was it the day where we told England where to go? Well not exactly. Here’s the story.

Jolly Old England had a problem with overcrowding in their prison system in the late 1700’s. Since the Yank’s told them to shove off recently (aka the revolutionary war) they needed to find a new place to ship all of these criminals. Mind you many of these people were convicted of minor offenses like stealing small amounts of food to feed their starving families. Luckily for them Captain James Cook had recently found fertile ground in the “great southern land” which we now know as Australia. So it was decided to load up several ships and send some convicts along with a few free settlers and officers on the long journey to Australia to create a new settlement. The idea was to have the convicts do manual labor and assist in building the new colony. After 7 years they would complete their sentence and would be free (but the kicker was they did not get a free trip back to England). So after several months on the open seas they landed in Botany Bay in what is known as Sydney today on January 26th, 1788 and became the first major white settlement in Australia.

So why did Australia choose this day to celebrate rather than the day Captain Cook discovered Botany Bay, or the day Australia signed the federation in 1901 to form its own government? I can only guess. Maybe its not known exactly which day Cook landed in Botany bay, and its highly unlikely to use Federation day since it was Jan 1st and everyone would be too wasted to acknowledge it. Maybe the other potential dates were all in the winter and they wanted a summer date. Or perhaps we as Australians are just proud of our heritage and don’t care that great great great granddaddy stole a loaf of bread and was shipped off for his hideous crimes against the country. Whatever the reason was for choosing this particular day Australian are proud of it and celebrate accordingly.

So what do you do on Australia day? Well its different for everyone but some people stay home. Some go outside to enjoy the last few days of summer holidays before they have to head back to school. Many people also have a bbq (that’s a cookout for the Americans) and others spend time at the local park for fireworks and concerts. No matter what we all enjoy a day off and a chance to celebrate.

Hopefully now you have an idea of what Australia day is. If what I wrote confused you just take this: its the Australian version of July 4th.

Why tipping is a good thing. 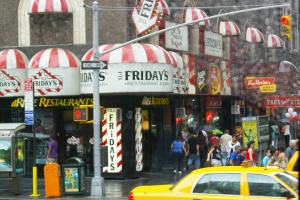 One of the biggest culture shocks visitors may encounter in America is tipping, especially if you come from a country where it isn’t customary like Australia. In Australia tipping is not expected nor customary. In America it is customary to tip many service personnel that you come in contact with. The problem is that many people visiting the United States don’t know who to tip and how much. It’s not like they post a sign telling us this in the immigration line at LAX.

So who do you tip and how much? Well that part is fairly easy once you get used to it. Pretty much anyone who provides you with service will accept and sometimes rely on your tips. These people include servers (waiters and waitresses), bartenders, delivery drivers, maids, bellmen, taxi drivers and hair-stylists. You don’t need to tip the cashier at a fast food place so feel free to order that extra double cheeseburger and Big Mac without fear of being obligated to fork out an extra 20%. Though if you order too many of those you may regret it later with a queasy stomach from all of the grease or being a regular customer at your local cardiologist.

How much to tip? Well many guidebooks and travel experts recommend around 20% of your bill. That is a good place to start and you can always tip a little more if you get exceptional service and a little less ,or a lot less if your waiter(ess) is horrible and spends more time smoking in the back room than ensuring your meal is delivered on time and your drinks stay refilled. You may ask why you should be asked to tip someone when you are already paying for you meal. The reason for that is that many of the service personnel that you tip rely on that for the majority of their wages. Their employers are required to pay them something and although it varies somewhat from state to state it is usually around $2.00 per hour. Without some decent tips these people will be going home and having to eat 3 minute noodles for dinner by candlelight as they wont be able to afford anything else.

So even though it feels like diners in the US are basically supplementing the incomes of our service staff I believe it is a wonderful thing. The service you receive in a restaurant or anywhere you are expected to tip is normally exceptional and usually better than the service you receive in areas where the wait staff are being paid a set wage and not dependent on tips. This  became quite evident on one of my last trips to Australia. While we were there in the winter of 2006 (Australian winter that is) we dined out at several different restaurants as we were on the road a lot plus we also wanted to try some of our family and friend’s favorite eateries. On most occasions, particularly in areas where tourism is a major industry the service was quite good. However there were two restaurants in my hometown where the service we got were less than satisfactory.

The first one was a popular Italian restaurant in town. It had been highly recommended to us by family and friends and we looked forward to going. We all sat down, placed our orders and got our beverages. Since many of us ordered pizzas it took a while to bake the pizza and we finished our drinks. We expected the server to come by every so often and see if we needed anything but she never came by. She did not come by until she brought us our food and it seemed that she did not want to do anything more than she absolutely had to. Luckily for her she was working on a set wage as I would have not left her a tip besides a smart comment about her trying to find a new job since she wasn’t very good at this one.

The second experience was at another popular restaurant in town. We went in and waited to be seated. The person seating us was the guy processing payments as well. There were several people checking out but at no point did he look over and acknowledge us. He continued to have lengthy conversations with the people paying and totally ignored the growing line waiting to be seated. After 10 minutes of being ignored we left along with several other patrons. It seemed this guy was more concerned with his buddies then providing the customer service he should be providing. Again he was not dependent on tips so he probably figured talking to his mates would pass the time quicker.

After these two experiences I have appreciated the service staff here in America even more. You may feel a little weird leaving a tip for service staff whilst in America but you will find that you will get a better level of service. Also tipping gives you, the customer a direct hand in rewarding the staff who go above and beyond to make your experience more memorable, and not the slackers who don’t give a hoot about you. That’s why I believe tipping is a good thing!

Welcome to my blog – Living in America.

Often i am asked about how different life is in Australia from living in America. It seems like an easy question but for me at least it is not as there are many things that are different. If prompted I could probably go on for hours or days about the differences and it quite often is the cause for a great conversation talking with my American friends about how things are done differently.

There are the obvious and well known differences like driving on the other side of the road, that Australians call each other “mate” and say “g’day” ,and Australia has a lot of unique, and some of the deadliest animals on the planet. But past those few items there are many things that many people don’t know about, and this is where people are inquisitive.

Australians have it much easier to learn about American life through countless TV shows and movies that are set and based on American life, no matter how loosely sometimes.  In fact about half of the American history I learned prior to moving here was from “The Simpsons” and a few movies I had watched as a child. Americans on the other hand don’t have much to go on as not many Australian shows or movies make it to the majority of the American public. The only shows/movies that have been popular here to my knowledge have been “Crocodile Dundee” and Steve Irwin the Crocodile Hunter. It’s a wonder that most Americans don’t think we live in tents and go out and hunt crocodiles and snakes for our dinner.

A few years back I compiled a list of differences on a sheet of paper and it didn’t take long to fill, and I am positive I have missed quite a few items. I recently found this sheet of paper and thought it would be a good basis for a book or blog. The hassle of writing a full book, having it picked apart by a editor and then hoping someone actually wants to publish it is more than I want to deal with. However a blog is quick, easy, and more people would probably read it than if I published a book, simply because it has pictures and most importantly its free.

My hope is to publish a new topic on a weekly basis so you have a good reason to come back and visit again. I would like to hear your comments and if you have any ideas, topics or anything else that would be helpful. Enjoy!